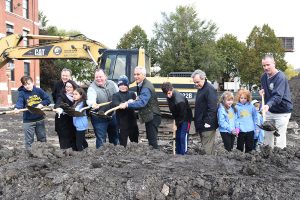 Mayor Rahm Emanuel today joined Alderman Patrick Thompson and County Board Commissioner John P. Daley to break ground on a new annex at Mark Sheridan Math and Science Academy. The 9,000-square-foot annex includes a gymnasium and multipurpose room and a science room. Renovations will be made to the existing building, including the addition of a new elevator.

“From high-quality educational programming to unrivaled athletic facilities, the City of Chicago will remain committed to making important investments for our students,” said Mayor Emanuel. “This new annex will give Sheridan students the opportunity and tools they need to thrive.”

Additional site improvements include upgrades to the existing parking lot, landscaping, ornamental fencing and a new playground. The annex at Mark Sheridan Math and Science Academy will bring the 1881 building into the 21st century.

“I am excited that this annex is being built at Sheridan Academy, and in a community that appreciates the vital role education has for the future of Chicago,” said Cook County Commissioner John P. Daley. “Unprecedented investments across the city help to support our students excel in academics and athletics so that they can thrive in the 21st century economy.”

Development of the project will be managed by the Public Building Commission of Chicago and the anticipated opening is Fall 2018.

“This investment is our community will give Sheridan students the opportunity to take on new academic and athletic challenges,” said Alderman Patrick Thompson, 11th Ward. “The new annex will be a staple not only for our students, but for our families and our communities as well.”

As Mayor Emanuel covered in his 2018 Budget Address, there has been more than $3.2 billion dollars in improvements at Chicago Public Schools since 2011. The city’s investments in youth will expand for the seventh consecutive year under the 2018 budget. Youth investments will be made to expand programming in high-quality early education, after school and youth mentoring.

The City of Chicago has been committed to broad investment in capital projects at schools across the city. Investments with CPS has included new schools and annexes, playgrounds and air conditioning, improvements and access to technology, new computers and expanded bandwidth, expanded academic programs and core facilities investments.